In association with Simon John’s Vintage drum show this article from Rhythm magazine Vintage view is a Ludwig and Ludwig Victory Kit circa 1944 which belongs to Sticky Wicket, it also features a great article on Art Blakey. For subscription to the magazine, follow this link 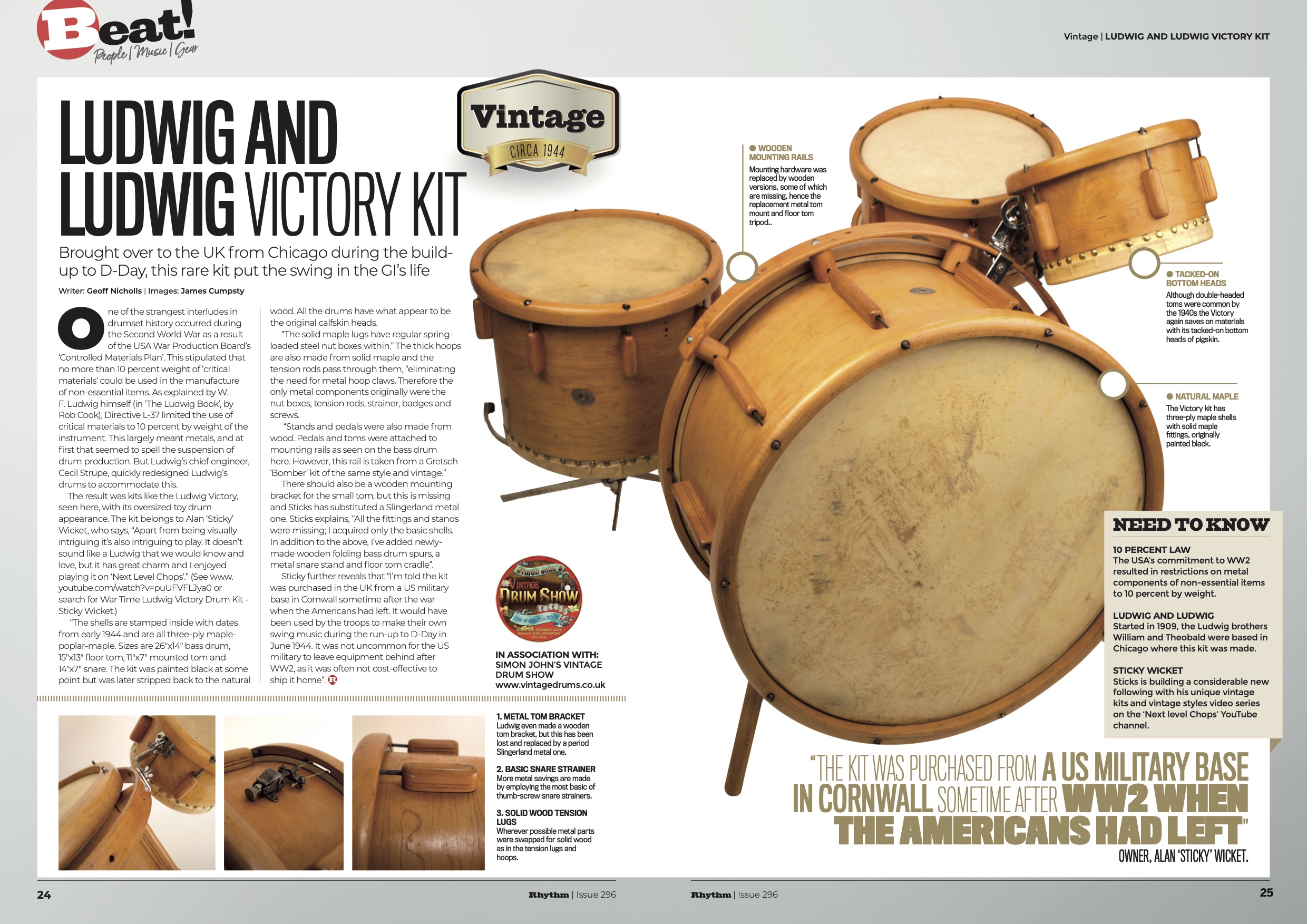 Rob's a busy UK drummer and has been touring the past year with Canadian world music artist Loreena McKennitt on her 'Lost Souls' world tour. He also played on Laura Pausini's 2019 Grammy winning album 'Hazte Sentir' and has appeared on recent albums for Goldfrapp, Loreena McKennitt, Michel Polnareff and Clara Ponty. He continues to perform drum clinics around the world for DW Drums and Vulcan Cymbals and 2021 will see Rob back on the road with Loreena for the rest of the 'Lost Souls' tour.

Vince Dunn over the last 30 years has performed with artistes in the jazz and pop world such as Leon Ware, Madonna, Kylie Minogue and Pharrell Williams to Award winning jazz artists Jim Mullen, Courtney Pine and Liane Carroll.
Vince is the co-founder of the London Drum Clinic and runs the very successful Vince Dunn Orchestra who perform an eclectic mix of jazz, Latin, foot tapping funk and classic big band swing.
Whilst freelancing still makes time to teach and and give tutorials. 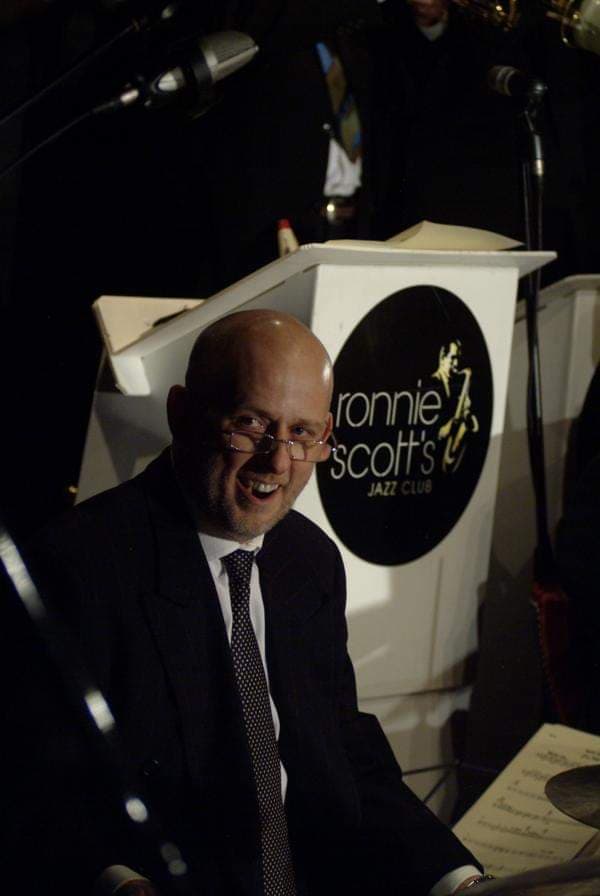 Mark is one of the UK’s most versatile and in demand drummers. Equally at home in straight ahead jazz, free improvised music, rock and world music, Mark was the house drummer at Ronnie Scott’s for 31 years and has played there and in leading venues around the world since the late 80s. Amongst others, he has worked with Dizzy Gillespie, Mark Murphy, Michel Legrand, James Moody, Dave Gilmore, Tim Garland, Liane Carroll, Norma Winstone, Georgie Fame, Ian Shaw, Cedar Walton and Kenny Wheeler. Mark leads his own band, Fletch’s Brew, which has a weekly residency at London’s Ronnie Scott’s Club.

Simon John's Vintage Drum Show is an annual event organised, promoted and managed by drummers for drummers to provide an opportunity for the display, promotion, trading of drums, associated products/items and drumming skills to be available to the drummers and potential drummers of the UK and beyond. It is a non-profit organisation and seeks to be self-funding.

The 2021 show will be held over the weekend of 9th and 10th October at the Standard Triumph Club in Coventry.

A fascinating city in its own right, Coventry is at the heart of the English Midlands - close to Birmingham, Leicester and the historic towns of Worcester, Leamington and Stratford upon Avon.

The city of Lady Godiva is steeped in history - it was briefly the capital of England in the 15th century - and with two universities and a population of 300,000, it offers plenty of culture including the Coventry Music Museum and some lively nightlife and live music in the nearby suburb of Earlsdon.

Literally a stones throw away, the Village has everything you want from a hotel - gym, swimming pool, restaurant and bar. Easy access from the A45 via M6 and M69 or Canley Railway Station.

Set in a prominent art deco building, this is a modern no-frills hotel 1.5 miles away. Rooms feature en suite bathrooms, complimentary Wi-Fi, flat-screen TVs and desks, as well as tea and coffeemaking facilities. Kids aged 15 and under eat and stay free with a paying adult. Easy access from the A45 via M6 and M69 or Canley Railway Station. 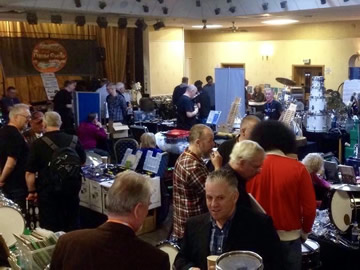 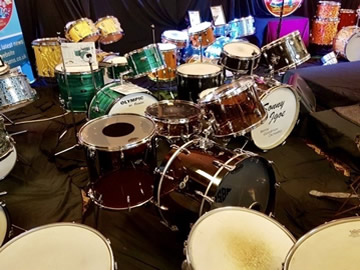 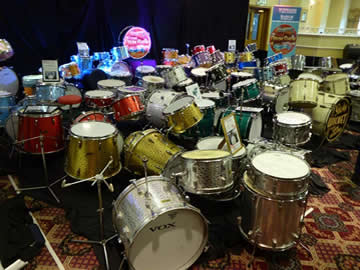 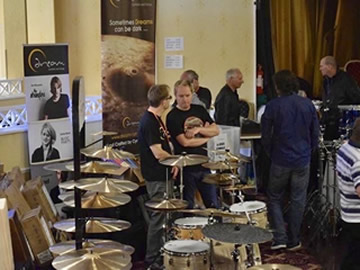 Been there, done that, now get the T Shirt!

One of the big surprises at last year's show was the demand for Vintage Drum Show merchandise featuring the logo. All we had were a dozen T shirts!

After repeated requests for beanie hats, hoodies, even badges and stickers we're giving in and will be offering a selection of goodies at the show. You will also be able to get them on line right here. Watch this space!

Memorable Moments from our first show in 2017

Memorable Moments from our show in 2018

Lee Brayshaw at GO Graphix for this website and graphic designs

James Topp for the show's floorplan and booking facility